RESPECTING THE RIGHTS OF THOSE LESS FORTUNATE 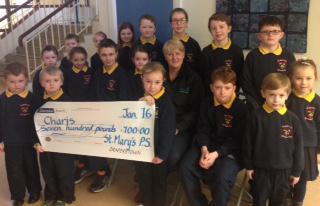 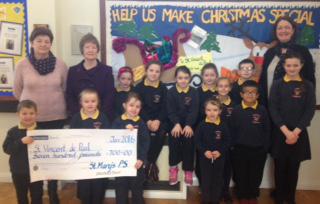 The school community of St. Mary's P.S. raised £1400 during the month of December for two local charities CHARIS and St. Vincent de Paul.  Well done everyone.

Liz Weir is an internationally known storyteller who travels to festivals, workshops and conferences  all over the world , so as you can imagine we were very excited when she agreed to come to Draperstown! The pupils had been designing bookmarks, book tokens and posters and drawing their favourite characters for the World Book Day competitions. The winners chose a book from the book club and Liz presented them with certificates too. 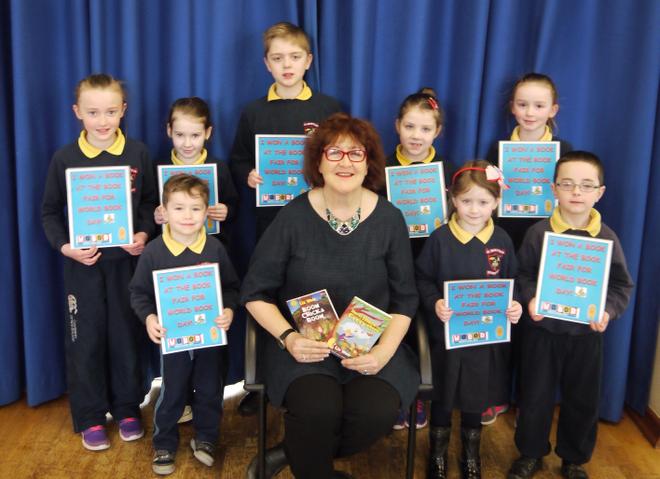 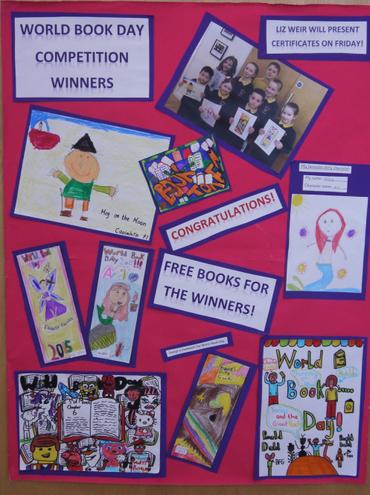 The children were treated to traditional tales and scary stories as well as getting the opportunity to ask Liz all about her storytelling and her job as an author. 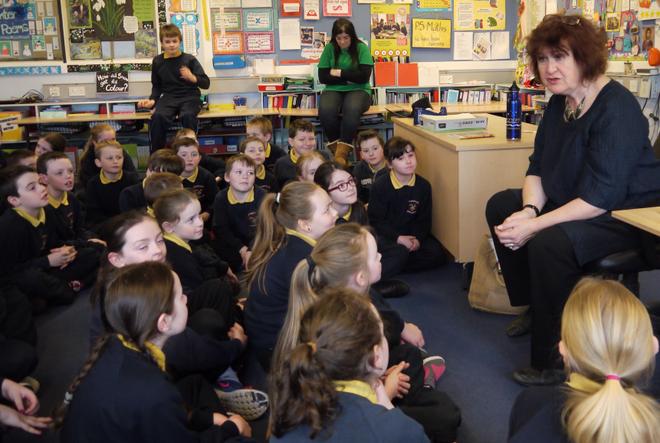 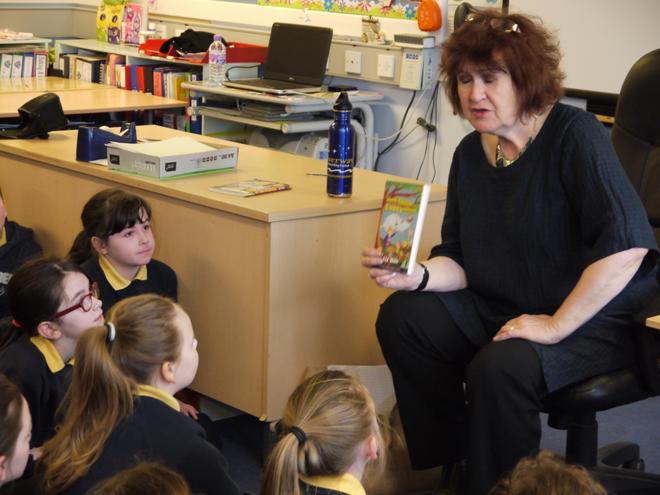 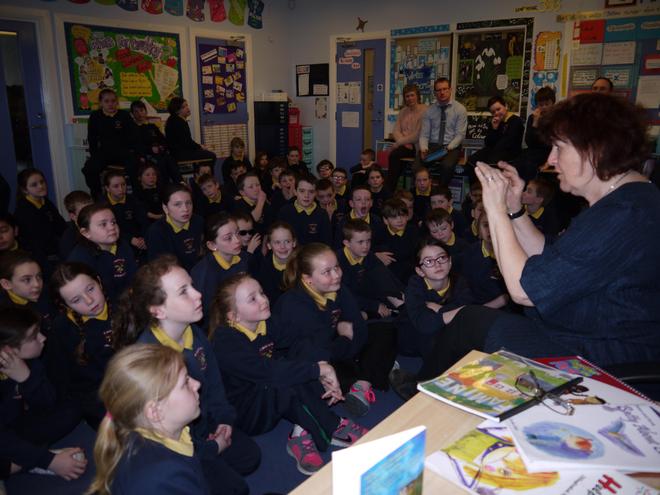 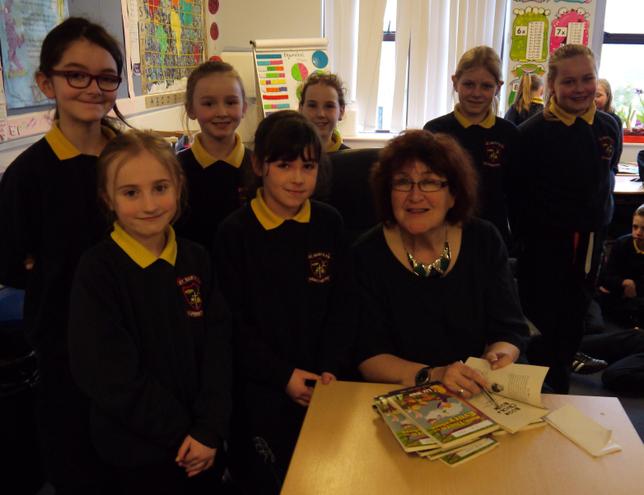 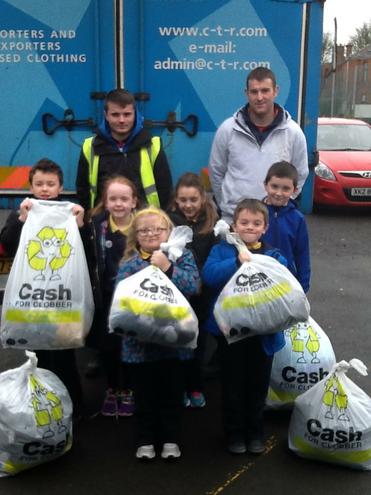 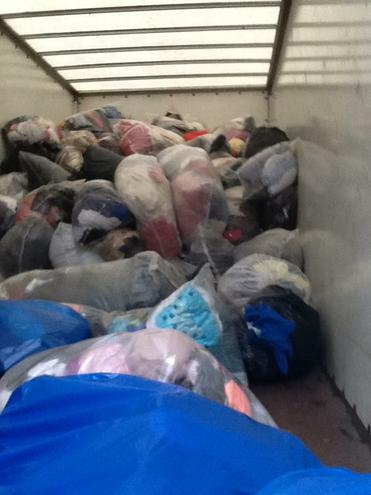 Congratulations to everyone who contributed to our Cash for Clobber appeal.  We collected a MASSIVE 220kg of clobber.  Well done everyone and thank you to the Eco-team for organising it.

Once again St. Mary's have excelled!

Beth Mc Elrath, from the Samaritan's Purse charity has informed us that our school consistently donates more shoeboxes than any other school in the area.  Our pupils and parents are caring and generous and we think that's one of the best things to be BEST at!  This year the boxes are going to Kosovo.  We will help make Christmas special for at least 174 children. We will all be thinking of those children when we are opening our presents on Christmas morning.

Mrs Higgins and St Mary's School Council attended the unveiling  of the sculpture by local artist, Kevin Killen depicting the townlands of Ballinascreen. Our P.7 pupils worked with Kevin to formulate some of the words which are now included in this unique and striking sculpture.  The School Council were delighted to be part of this special ceremony which involved many community groups. They also enjoyed finding out about the townlands of Ballinascreen as well as the folklore of the local area. 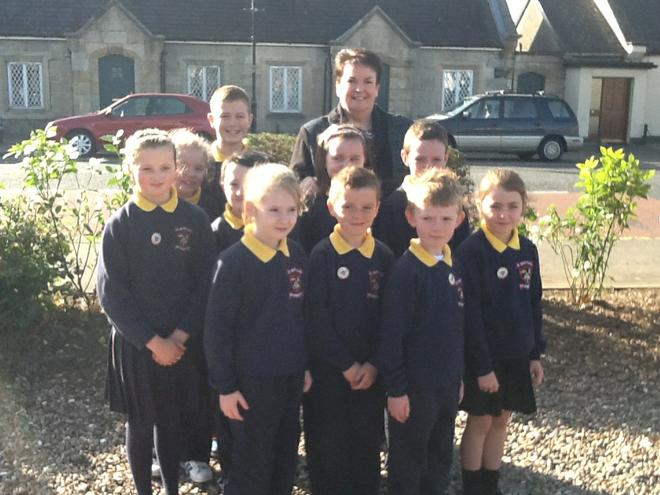 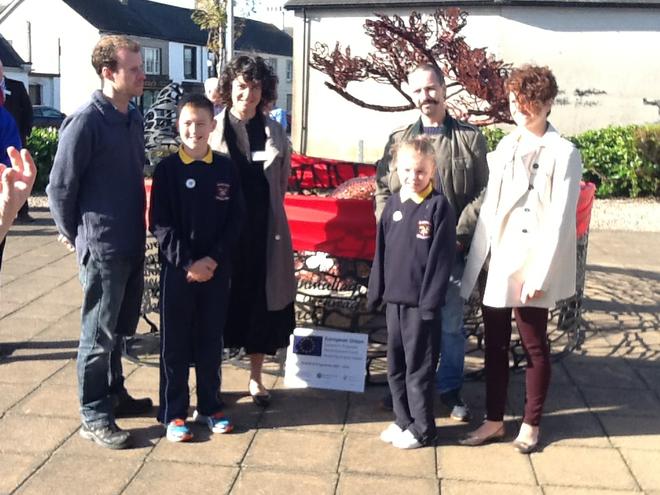 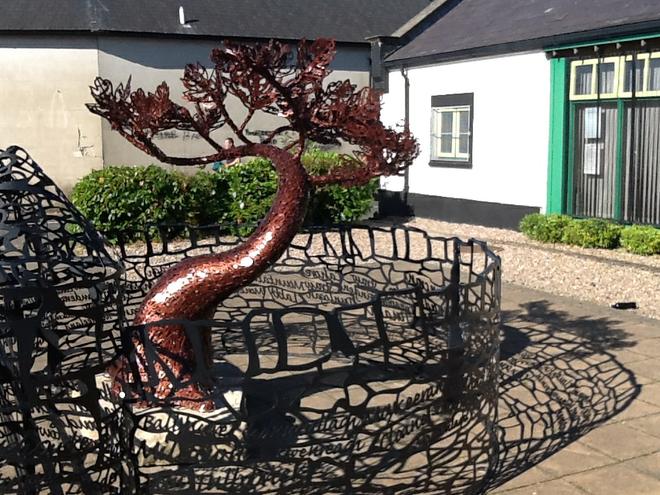 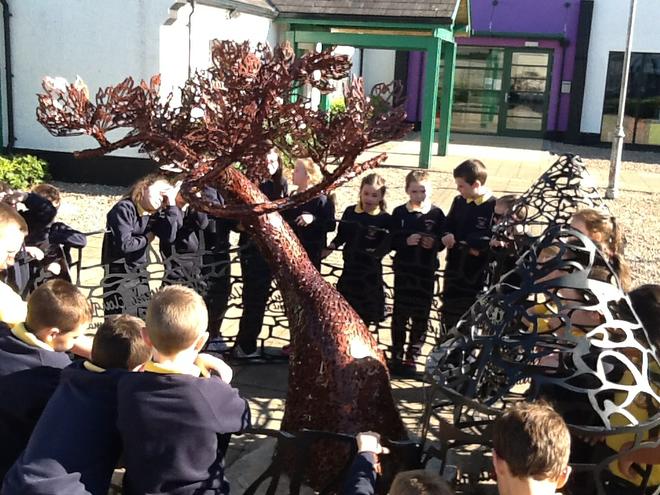 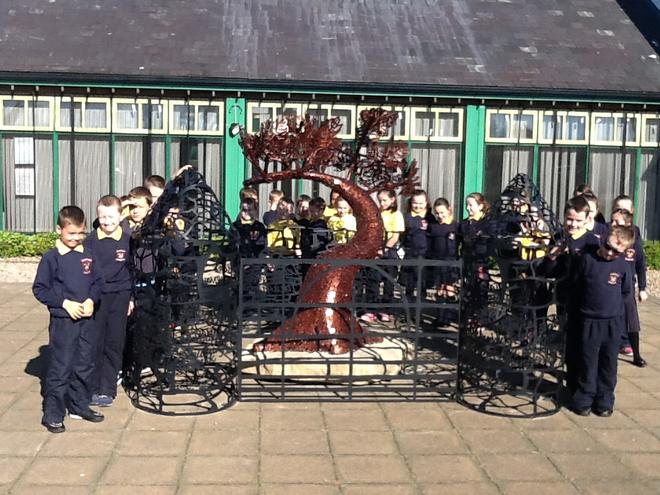 The harp project was born out of a desire to promote the rich heritage of local traditional music, which was recorded by famous collectors like Edward Bunting and George Petrie.  We felt it was important to help preserve this music both for the children in the school and the wider community of Ballinascreen.

We began by commissioning two harps from William McDonald on the Isle of Skye. A third harp was then purchased from Paul Dooley, with the kind assistance of  Magherafelt Arts Trust, as well as kind assistance from Mr Seán Mac Giolla Cheara, the then Chairperson of Magherafelt District Council.

Mrs Anne McAllister gives very generously of her time to help teach the children each week and draws from the pool of local ancient airs.  Many parents will remember Mrs McAllister in her role as the music teacher in our school previous to her retirement and may even remember learning songs like My Bonny Cuckoo, which was recorded on the Ballinascreen LP along with a note about its antiquity and how it was collected by Bunting in 1792 at the Belfast Harp Festival.  The harp project is therefore very close to Anne's heart and having her involved with it is of great benefit to us. 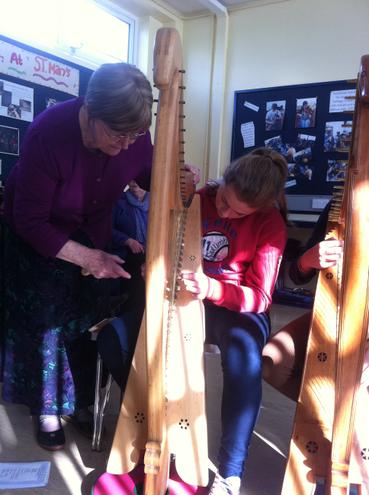 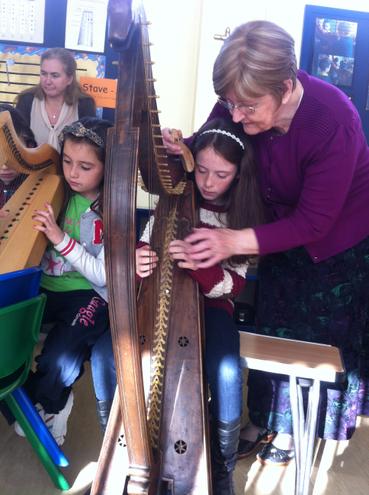 A few months into the project we organised a weekend workshop for wirestrung harp in collaboration with the local Traditional Music Club.  We invited Paul Dooley to take the workshop.  Children from the Saturday group as well as pupils from our school attended and received further insight into the mechanics of the instrument from one of Ireland's finest players.

Our school was also involved in the making of the TV documentary 'Banríon an Cheoil' which followed the making of a replica of the Downhill Harp.  Our harp project has enjoyed great support from Séamus O Kane,  who helped make the replica.  Séamus regularly allows us to borrow the harp he made for our classes and for any performances.  We are very grateful to Séamus for his ongoing support.

We were able to purchase new sports kits this year due to the generous support of our sponsors.  Thanks to Derek McGeehan, McGeehan Motorsport, Sean McCallion SMC Construction and Damien McCullagh, DMC Steel Erectors and Cladding.

Throughout the Dissolving Boundaries project we have enjoyed video conferencing, using wikis and moodle to communicate with children all over Ireland.  We are currently in partnership with Scoil Naisiunta Peadar agus Pol in Carlow. We have been carrying out joint projects explaining all about our local area.  We had great fun when we met in Croke Park.  The pupils really enjoyed this visit and it was a lovely opportunity to meet all the children we have been working with.

There are numerous examples of Penal Crosses throughout Ireland and some areas seem to have an abundance of them.  They are usually very small, being easily hidden during transportation from Mass Rock to Mass Rock.  Our Ballinascreen Penal Cross is unusual for several reasons.  It is quite large, some of the carved motifs are not found on other examples, and as far as we are aware it is the only Penal Cross that exists in this parish.  It is more finely carved and is much more elaborate than other crosses, a mark of the quality of craftsmanship prevalent in Ballinascreen at that time, another famous example being the harp made by Cormac Ó Ceallaigh.

As part of the 50th celebrations, our whole school took part in a history project based on the Ballinascreen Penal Cross which has been handed down through Mrs Crozier's family.  We worked with Archaeologist, Thomas McErlean and Magherafelt District Council's Irish Language Officer, Déaglán Ó Doibhlin.   Along with the kind assistance of Magherafelt Arts Fund, our school commissioned the Dublin sculptor Séighean Ó Draoi to make us a replica of the cross to mark the school’s 50th Anniversary.  Fr Crilly gave an interesting talk on the history of the cross in Ireland and Séighean presented the beautiful replica to the school.  The replica was blessed at our celebratory 50th Anniversary Mass by Monsignor Eamon Martin and is now displayed in the school and used on the occasion of any mass held in school.

In 2011 the children completed their class projects on the cross and the Primary 7 children visited Glengomna Mass Rock.  They helped clear away overgrowth and cleared an entrance path to where the Mass Rock stands.  Later they took part in celebrating mass there and our penal cross took pride of place.  It was a very special experience for everyone involved.

In St. Mary's we have an extremely hard working Eco-team and we recently had our green flag renewed for being such an Eco friendly school.  As part of our Eco activities, we work closely with the Eco-team from St. Colm's on a range of projects each year.  This includes 'The Big Spring Clean' which we carry out annually, cleaning up both schools and the Moykeeran Plantin.  We would like to thank John Murtagh from Magherafelt District Council for all the help and support he provides. 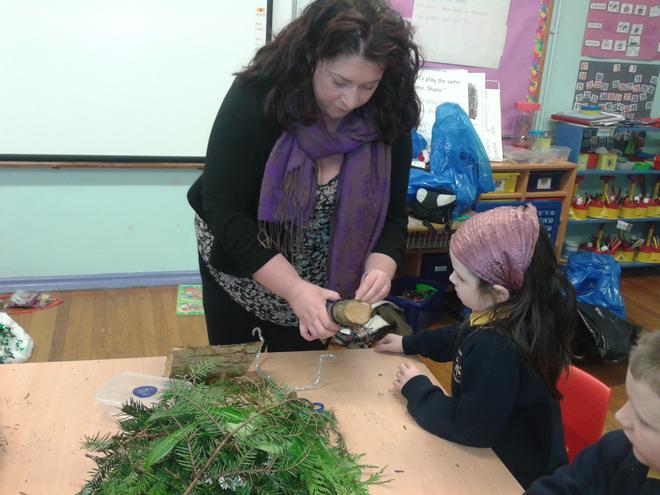 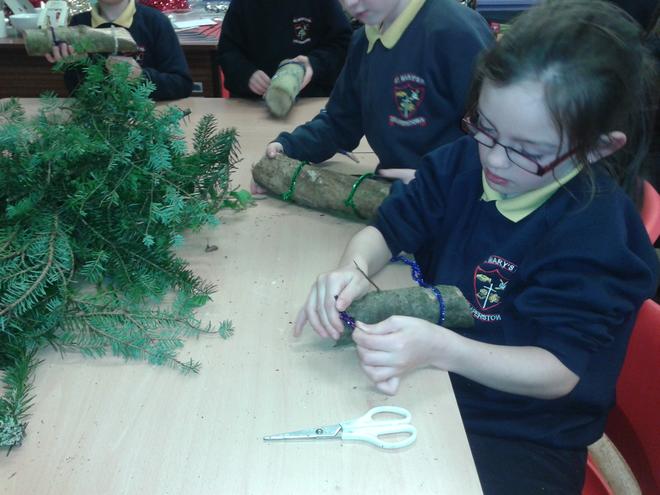 Primary Four learning about seed dispersal with Stephanie and Helen. 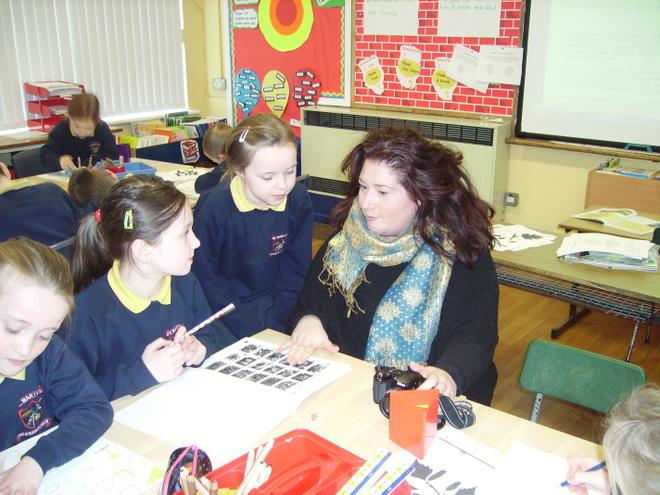 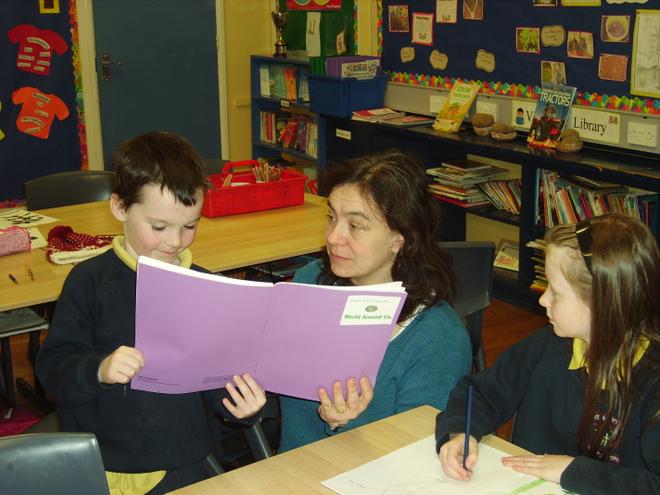 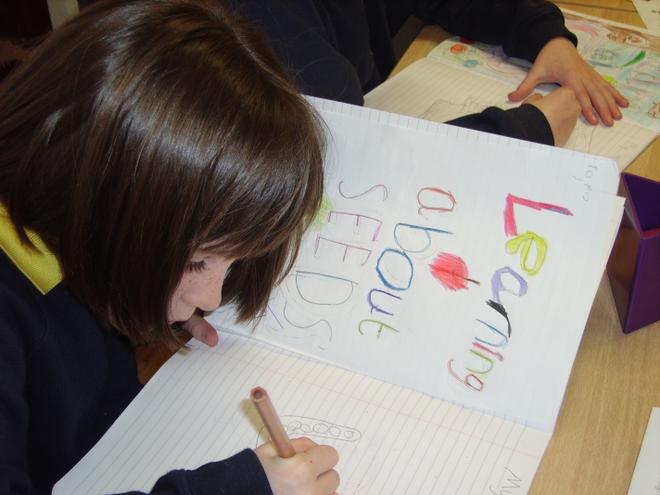 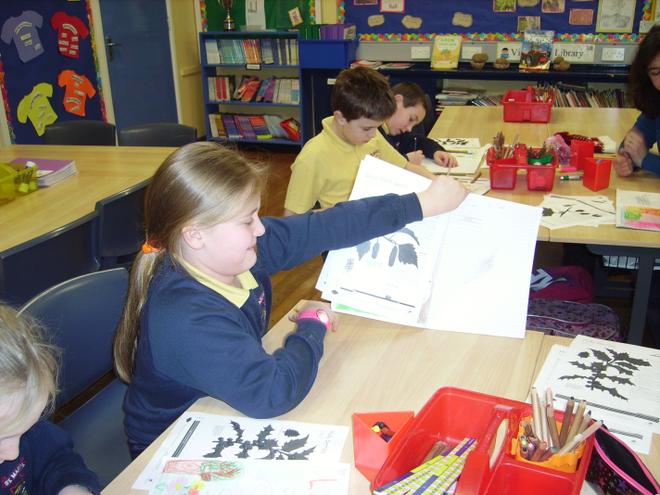 As part of our ongoing Irish language initiative in St Mary’s, a member of staff was given the opportunity to spend a week working in an Irish Medium school in the Donegal Gaeltacht Lár.  The Lifelong Learning Programme, under Comenius, funded inservice training for Mrs Aoibheann Devlin, to job shadow in a Gaeltacht school - Scoil Naisiúnta Taobhóige.

As well as learning a great deal about the working day of an irish language school, she was able to bring along a taste of the rich culture in Ballinascreen.  She gave each of the classes a powerpoint presentation of our own school and area as well as a separate presentation on the Downhill Harp.

‘The children there understood that I was trying to improve my spoken language through Irish and were considerate and helpful towards me.’

'Making the children in our own school aware of the activities in another school proved interesting.  They could see similar projects going on, eg.  Scoil Glas – Eco-Schools.  Displays around the walls showed the same messages, only in Irish.'

St Mary’s continues to forge ahead with the promotion of Irish, and this year will see some of the Primary seven children achieving a Líofa badge.

The younger children in P.1-4 continue to learn Irish in class with Ms Mc Kenna, who visits the school to tutor them once a week. 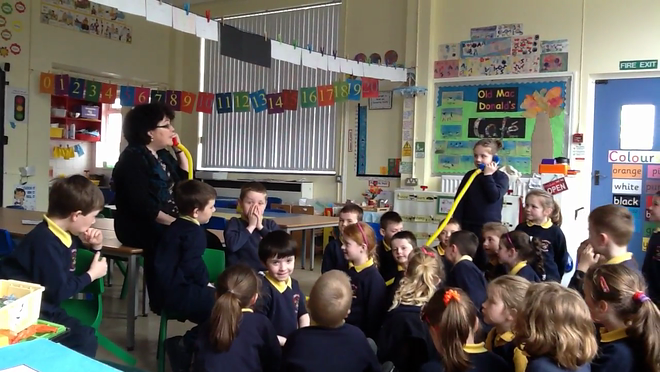 St. Mary's Primary School has been participating in the Peace Proms for a number of years, performing in Belfast's Waterfront Hall and The Ulster Hall. The experiences for both pupils and their parents are wonderful.

The concert features The Cross Border Orchestra of Ireland, directed by Gearóid Grant, along with leading soloists, The Drum & Pipe Corps of the Royal Scottish Pipe Band and a peace choir of 1000 voices made up from children from both communities, from both sides of the border.

Unfortunately not the ones with chocolate chips.

Some cookies are necessary in order to make this website function correctly. These are set by default and whilst you can block or delete them by changing your browser settings, some functionality such as being able to log in to the website will not work if you do this. The necessary cookies set on this website are as follows:

Cookies that are not necessary to make the website work, but which enable additional functionality, can also be set. By default these cookies are disabled, but you can choose to enable them below: